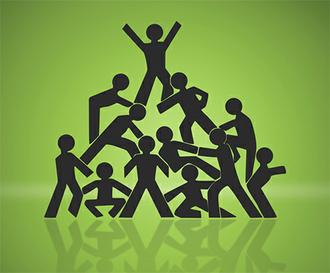 In the classic "pyramid" scheme, participants attempt to make money solely by recruiting new participants into the program. The hallmark of these schemes is the promise of sky-high returns in a short period of time for doing nothing other than handing over your money and getting others to do the same.

The fraudsters behind a pyramid scheme may go to great lengths to make the program look like a legitimate version of a multi-level marketing program. But despite their claims to have legitimate products or services to sell, these fraudsters simply use money coming in from new recruits to pay off early stage investors. But eventually the pyramid will collapse. At some point the schemes get too big, the promoter cannot raise enough money from new investors to pay earlier investors, and many people lose their money. The chart below shows how pyramid schemes can become impossible to sustain:

This table shows how many new paying members must be recruited at each level for programs (schemes) that require each new member to recruit 4, 5, 6, 7, or 8 new members.

You can see that for most "programs", you'd better have no more than 3 levels of members "distributors", etc.) above you!

For the sake of this example, let's assume that the scheme depends on each participant recruiting 6 new members into the scheme. The figure below shows how many people will need to have joined the scheme at each level, in order for those above to be paid. Since the current total population of the world is approximately 6 billion people, after only 13 levels there are not enough people on the planet to keep the scheme going!  this means if there are 11 or 12 levels of "distributors" or "representatives" (or whatever they call the participants) above you, you can not possibly make a profit!

Why is pyramiding prohibited? Because plans that pay commissions for recruiting new distributors inevitably collapse when no new distributors can be recruited. And when a plan collapses, most people -- except perhaps those at the very top of the pyramid -- lose their money.

Nothing irritates a die-hard MLM'er more than the preceding argument. If you point out the absurdity, for example, that if "the pitch" at an Amway meeting were even moderately accurate, in something like 18 months Amway's income would be larger than the Gross National Product of the entire United States.  If you point this out, they will shift their premise and say  "Well, that is absurd, of course. Not everyone will succeed, and so the market will never saturate."

Well, which is it? Are we recruiting "winners" to build a real business, or planning by design to profit off of "losers" who buy into our "confidence"?

During the initial pitch, they will emphasize that anyone can make it work, even if you have no previous experience selling.  "The product sells itself!  Just give them the trial kit!" (oh yes, you must purchase the trial kits, by the way!).  "It's the opportunity of a lifetime.", they'll tell you.